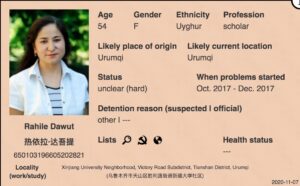 Rahile Dawut, a professor at Xinjiang University in Ürümqi in China’s Xinjiang Uyghur Autonomous Region, is a folklorist and ethnographer. She created and directed the University’s Minorities Folklore Research Center and is the author of dozens of articles and a number of books, including landmark studies on Islamic sacred sites in Central Eurasia.

Prof. Dawut disappeared in December 2017, after telling a relative that she was preparing to board a plane from Ürümqi to Beijing. Her current whereabouts are unknown, although it is believed that she is being held by the Chinese Government in a so-called “re-education camp,” a detention center, or a prison.

Human Rights Watch and other organizations have reported on so-called “political education” camps in Xinjiang, where an estimated 1 million or more Uyghurs and others have been “detained without any legal process, and subjected to political indoctrination, ill-treatment, and sometimes torture.” A group of United Nations human rights experts stated, in December 2019, that “incommunicado detention, enforced disappearances and secret trials have no place in a country governed by the rule of law,” adding that “such practices go against the spirit of the International Covenant on Civil and Political Rights, which China has signed in 1998.”

Free My Mom/ Free Rahile Dawut is a campaign started by her daughter, Akida Pulat, immediately after her mom disappeared. We meet her on the homepage, where she writes “My name is Akida and I’m Uyghur. I want to tell you the story of my mom. She is one of at least a million people that the Chinese government has detained. Her name is Rahile Dawut. She is an amazing mother and teacher. There was never a day that we didn’t speak on the phone. On December 12, 2017, that changed. I still remember that day vividly. It was a Tuesday afternoon. I couldn’t wait to tell her about my day. But she was in a rush boarding a plane to Beijing. I was waiting for her to call me back. Three years later, I’m still waiting for that call. With the COVID-19 pandemic, I am scared for my mom’s life.”

You can follow and get involved in Akida’s new social media campaign to Free My Mom/ Free Rahile Dawut, where you will find many ways to show solidarity and support.

Video advocacy on behalf of Rahile Dawut is an effective way of getting the message out. Where is Rahile Dawut? is an advocacy video series that HR 105 students created. Here’s the first episode:

And  here is one of the HR 105 students posting an advocacy video on Tik Tok:

Where is Rahile Dawut? is also an open letter drafted by the HR 105 students, made available here for all interested people to download, sign, and send to their Congressional or Senate Representatives, Chinese Embassies or Consulates, or other offices or individuals who may be interested and able to assist in locating Professor Dawut. The letter is available to print and sign in English or in Chinese.

The finance team of the HR 105 campaign is centered around actions that can be taken within Bard College to actively disconnect from economic ties to Uyghur forced labor. This team is requesting President Botstein and Chief Financial Officer, Taun Toay identify and release any associations between Bard and companies that have ties to Xinjiang. The list of companies or brands is based on the Coalition to End Uyghur Forced Labor‘s list of groups that are linked to forced labor or have not publicly disclosed their supply chains. The financial team is also submitting a letter to the Bard athletic department to request a separation from Nike, the athletic wear provider to the school.

The President and CFO of Bard College have responded supportively to the letter, and with their permission we are sharing their comments here:

Thank you for the letter and for taking the issue on. I am sure Taun Toay will look through Bard’s connections for any links. In terms of investment we have, for all practical purposes, a very small endowment of our own. Nonetheless, it pays to be thorough and locate any ties there might be in the economic activity under college’s control. President Leon Botstein

Thank you for your letter and bringing this to our attention. I am copying […] our Socially Responsible Investment Committee. We have actively engaged companies on similar issues (Urban Outfitters on forced labor in Uzbekistan, for example). I would ask that you combine your efforts with the SRIC, since the greatest way to effect change may not be through BDS tactics, but actually for us to buy Nike and engage them as shareholders. I realize the irony in that approach, but Bard has a long history of “shareholder activism”. As it stands now, we do not own Nike stock and I am happy to freeze any athletic purchases from them. It would be helpful to point Athletics to a more socially responsible alternative (a great number of apparel companies were cited in your letter links). I look forward to working with you and the SRIC on this issue. Chief Financial officer Taun Toy

HR 105 students drafted a petition to the Open Society University Network to advocate for Rahile Dawut’s appointment as the first honorary faculty of the Network. Shortly after the students’ letter was received, a press release was issued announcing

“In appointing Dawut to this position, OSUN expressed its support for the international movement for her release, and pledged to welcome her to a network institution to further her research and teaching when she is freed.”

A new Instagram video by Freemymom.org, titled Rahile Dawut: Three Years of Silence, features many academics and friends throughout the world who are calling for her release:

Scholars at Risk (SAR) announced that Dr. Rahile Dawut is the recipient of its Courage to Think Award for 2020. Dr. Dawut is being recognized for her own work, as well as that of all the scholars and students of the Xinjiang Uyghur Autonomous Region, who together struggle for academic freedom and freedom of opinion, expression, belief, association, and movement.The award, which will be presented at SAR’s virtual conference Free to Think 2020: Responding to Attacks on Higher Education, will be accepted by Dr. Dawut’s daughter, Akida Pulat. The Courage to Think Award recognizes individuals, groups, or institutions that demonstrate an exemplary commitment to protecting scholars and promoting academic freedom, whether through professional work, private or community service, or by facing personal risk.