“Violentology: A Manual of the Colombian Conflict,” a talk by Stephen Ferry 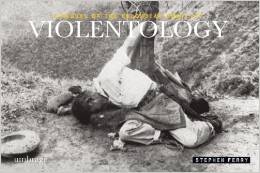 Violentology: A Manual of the Colombian Conflict, A Talk by Stephen Ferry

Violentology: A Manual of the Colombian Conflict documents Colombia’s internal armed conflict with a focus on human rights and the struggle of Colombian civilians to resist the violence, often at great risk to their own lives. The project also looks at the history and current dynamics of the war in Colombia, while exposing the role of the distinct parties in the conflict.This project was supported by the Tim Hetherington Grant, a joint initiative of World Press Photo and Human Rights Watch. To read more about the project, visit the WorldPressPhoto website. You can also visit the Violentology website. You can also hear Stephen Ferry interviewed by Maria Hinojosa last November on NPR.

Since the late 1980s, Stephen has traveled to dozens of countries, covering social and political change, human rights, and the environment. He has contributed to the New York Times, GEO, TIME, National Geographic and many other publications.  Stephen also works as a visual investigator with Human Rights Watch.

Stephen’s work has received numerous prizes in international photographic contests, such as World Press Photo, Picture of the Year and Best of Photojournalism. He has received grants and fellowships from the National Geographic Expeditions Council, the Ambassador’s Fund for Cultural Preservation, the Fund for Investigative Journalism, the Alicia Patterson Foundation, the Howard Chapnick Fund, the Knight International Press Fellowship, the Getty Images Grant for Good grant, the Open Society Foundations and the Magnum Foundation Emergency Fund. Visit his website.

This event is organized by the Human Rights Project and the Photography program.